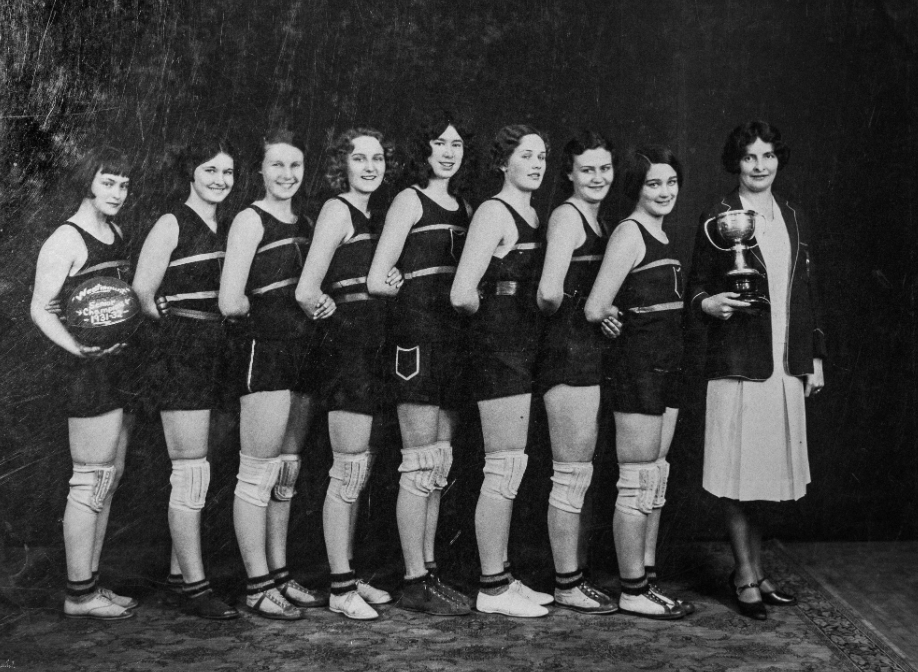 The Edmonton Grads: Hi, Friends Today I am going to share some interesting facts on The Edmonton Grads. The Edmonton Grads were a Canadian women’s basketball team. It is based in Edmonton, Alberta in Canada. It is active from the year 1912 to 1940. The team continues to hold the North American record for the women’s sports team with its best winning percentage. The Grads won the first women’s world title in basketball in the year 1924.

The Edmonton Grads in the year 1915 to 1940 was a women’s championship basketball team which is coached by Percy Page. During their 25 years as a team in Edmonton. The Grads won a notable 95 percent of their matches. The Grads were national and world champions, continuously defeating their opponents with one side lower scores.

The team won the Underwood International Trophy in the USA to Canada for 17 years straight from the years 1923 to 1940. This was undefeated in the 24 matches held in the action with the Olympic Summer Games in the year 1924, 1928, and 1936. The Grads were named to Canada’s Sports Hall of Fame in the year 2017.

The Beginning of the Edmonton Grads

Basketball was a relatively young game when the Edmonton Grads teams formed in the year 1915. The sport had been established in the year 1891 by James Naismith. He is a Canadian working at the YMCA International Training School in Springfield, Massachusetts. Like most other sports, it was originally meant for male players.

But it was not so long before females started playing as well. By the late years of the 1890s. Many young women were playing basketball at high schools like examples Windsor Collegiate Institute in Ontario, universities, the University of Toronto, and also the YWCA. It had started to begun women’s basketball clubs for example Ladies Basketball Club of Toronto.

This was coached by teacher Percy Page. This team won Edmonton’s high school league in the year 1914 and won the intercollegiate basketball league as well as the Alberta empire championship the following year.

At the end of the year 1915 season, many graduating members of the team were decided to continue playing basketball and formed the Commercial Athletic Society which is later called the Commercial Graduates Basketball Club.

The society was open for the students and graduates of MacDougall Commercial and to the members of other business schools as well. Those already pursuing a career in the business. They soon become known as the Commercial Graduates and in the end, it called Grads.

In the year 1922, the Edmonton Grads won their first national championship. They defeated the London Shamrocks, the eastern champions from London, and Ontario, in the two games with a combined score of 49 to 29. The first game was played according to the women’s rules with six players.

But the second game was played according to men’s rules with five players. Until this point, the Grads had only played to using women’s rules, but they would adopt the less restrictive men’s rules after the following year. The team was easily won the first match 41 to 8.

But the Shamrocks, who preferred men’s rules and won the second match 21 to 8. However, the Grads’ team’s overall score was higher, which confirmed the championship. They successfully defended their national title until the team breaks up in the year 1940.

Only a year after winning their first national championship, the Grads teams have competed for the first Underwood Trophy. Which was a “world championship” competition between the American and Canadian champion teams. Therechallengers, the Cleveland Favorite-Knits, wore shorts already telling the words World Champs.

This confidence was out of their hands. however, The Edmonton Grads played two games against the Cleveland team, to defeat them with a combined score of 53 to 33. Over the next 17 years in the years 1923 to 1940, the Grads defended their title against so many challengers, winning most of their matches. In their 25th and final season, the team received the Underwood International Trophy as a permanent owning.

The Grads proved their power in overseas matches as well. The team participated in the matches which were organized by the Fédération sportive féminine Internationale and held in the action with three Olympic Summer Games in the tears of 1924, 1928, and 1936.

The Grads won all 24 games, defeating their challengers by large margins. In the year 1928, for example, they beat the team of Équipe de Paris by a score of 109 to 20. In the identification of their power. The Grads were named as world champions. However, but the team did not bring home any Olympic medals. International Olympic Committee did not create the matches, and women’s basketball was not an official Olympic event at that time.

Women first began to compete at the Olympics in the year 1900 with the five sports namely Golf, Equestrian, Sailing, Croquet, and Tennis. By the year 1936, Archery, Aquatics, Gymnastics, and Athletics were in track and field. It had been opened to the women’s participation at the Summer Games. Women’s basketball did not become an official Olympic event until the year 1976.

The first McDougall Commercial High School team in the year 1914 was comprised forwards to Nellie Batson and Ella Osborne. It was center Ethel Anderson and Mary Bremner and guards Geraldine Reid and Iola Mitchell. Late in the year 1915, Winnie Martin joined the team.

In the year 1917, when the Edmonton Grads officially started competing, the team was included Batson, Osborne, Anderson, Martin, and Reid, as well as Elena Todd. She was a star player from the senior high school team.

Between the years 1917 and 1922 when the team won its first national championship, a number of players came out and went, that including Alfretta Dickson, Connie Lamont, Mona Karren, Kathleen Hall, and Dorothy Shaw. Most of these players are not identified among the official 38 members of the Edmonton Grads. It only includes players from the years 1922 to 1940.
The Significance of the Team

Player In The Edmonton Grads

The Edmonton team was the dominant women’s basketball team of the early 20th century, with a record that many teams today would luck. They played to the capacity crowds, attracting thousands of spectators and brought fame to the city.

As their successes were reported in the newspapers across the country and overseas. In the year 1923, the story of the team’s success in the Underwood Trophy competition was taken by most of the major newspapers in Canada, around 300 daily papers in the United States, and publications in the states of Hong Kong, the Philippines, and Cuba.

In the year 1936, James Naismith, who was the Canadian introduction of basketball and wrote a letter to the Grads. You are not only an inspiration to the basketball players throughout the world. But a model of all-girls’ teams.

The attitude and success have been a user of pleasure to me in explaining the possibilities of the game in the development of the highest type of womanhood of the team.

The Edmonton Grads: 5 Fast Facts You Need to Know

The Edmonton Commercial Graduates Basketball Club, often known as “The Grads,” is the full name of the Edmonton Grads. The team “began as a high school girls basketball team and grew into a sporting dynasty,” according to Google. According to The Canadian Encyclopedia, the initial team included Nellie Batson, Ella Osborne, Ethel Anderson, Mary Bremner, Geraldine Reid, and Iola Mitchell.

The Grads are recognised with smashing misconceptions about women’s sporting ability, and they are noted for their “excellent sportsmanship and determination,” according to Google.

According to Google, the squad was founded in 1914 by a teacher named Percy Page “as a physical education programme for the 60 girls at McDougall Commercial High School in the Canadian city of Edmonton.”

Page later rose to the position of Lieutenant Governor of Alberta. According to the CBC, he instructed his players, “You must play basketball, think basketball, and dream basketball.”

2. The last surviving member died in 2018, and they were described as a “group of ordinary women who did extraordinary things” by an author

Kay MacBeth was the only surviving member of the Edmonton Grads. According to the Globe and Mail, she died in 2018 at the age of 96.

Christin Carmichael Greb, her granddaughter, told the newspaper, “It’s truly the end of an era.” “It was like the movie; there were these ladies who were excellent athletes who we don’t normally hear about in basketball.”

Ann Hall authored a book called “The Grads Are Playing Tonight!” on the Edmonton Grads. “They were a group of regular ladies who performed the extraordinary,” she told the CBC. They worked as clerks, saleswomen, and typists. The entire time they were preparing and playing, they had to work.”

3. The Edmonton Grads dominated their sport, even competing against men’s teams on occasion, until World War II intervened

The Grads were considered as Canada’s “most successful team in history,” according to the Globe and Mail, winning 17 global titles. From 1915 through 1940, they had a 502-20 record. However, they ceased to perform in 1940 “due to wartime duties and declining attendance.”

According to the Globe and Mail, they won seven of the nine games they played against men’s teams. According to the CBC, many Canadians had never heard of the Grads, who had likewise stopped playing due to World War II. They also visited Europe at the time.

According to the Canadian Encyclopedia, the Grads had a total of 38 female players.

4. The Grads paved the way for women in sports, but they were still discriminated against at the time

The 1920s were a golden era for women in sports in Canada, according to the Canadian Encyclopedia. That isn’t to say the Edmonton Grads were without adversity.

According to the site, Naismith referred to them as the “ultimate sort of womanhood,” and Page underlined the importance of them remaining ladylike. Some Canadians objected to women participating in sports.

“You are not only an inspiration to basketball players all across the world, but a model for all girls’ teams,” Naismith remarked of the Grads. Your attitude and success have given me great pleasure in demonstrating the game’s potential in the development of the finest type of womanhood.”

5. Practices, low turnover, a farm team system, and Page all contributed to the team’s success

The Grads, according to the Library and Archives of Canada, were exceptionally determined and consistently practised.

The Grads “practised twice a week, except for the summer months” for 25 years, according to the site, and Page only missed three practises during that time because he began a political campaign. Another reason for their extraordinary success was that there was almost no turnover on the team.

To refill the team, Page devised a “McDougall School farm system.” According to Library and Archives, when one of the team members, Mae Webb, died, her daughter June said, “One thing I remember my mom saying – and I was in sports – was that Mr. Page used to say: ‘You’re ladies first and basketball players second, and if you can’t win playing a clean game, you don’t deserve to win.”

So, these are the essential points on the above-mentioned topic The Edmonton Grads basketball team with their Role, History, and Significance on the team with the other opponents.

Please go through this article and enjoy reading it. If any Queries or Questions is persisting then, please feel free to comment on the viewpoints.

E Meme Shows Just How Weird Memes Can Get In 2022