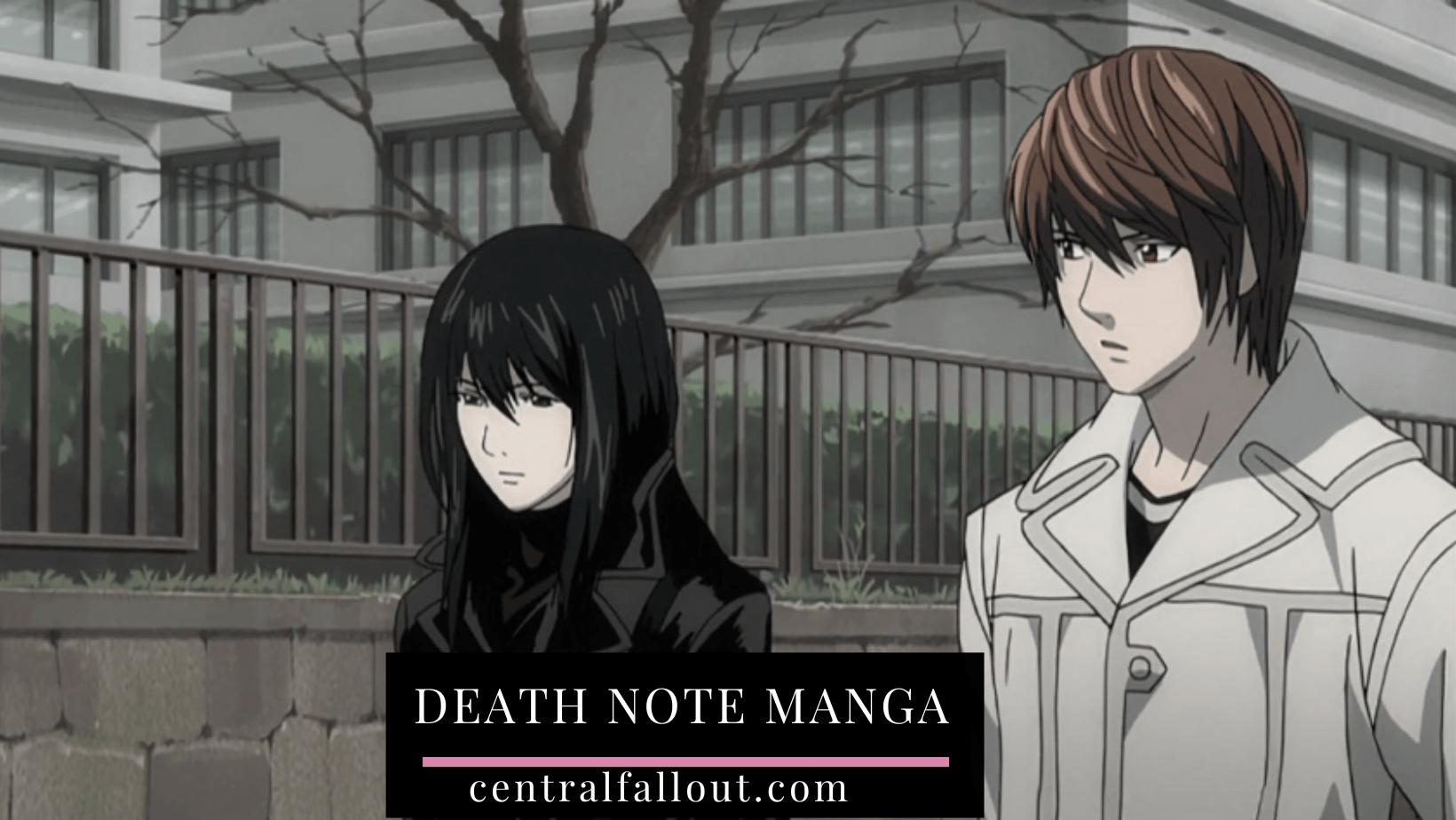 Death Note Manga is a modern classic that has built up a strong fan base. Goodreads users say that these are the best manga. The Death Note manga, written by Tsugumi Ohba, has 108 chapters spread out over twelve volumes, plus a bonus thirteenth volume with character bios, official canon commentary, and more.

Death Note is mostly about how Light Yagami uses the power of the Death Note to try to make the new world look the way he wants it to.

Shinigami have books called “Death Notes” that can be used to kill. Whoever’s name is on a death note will die in 40 seconds. Shinigami Ryuk accidentally dropped his Death Note in the human world, where honour high school student Light found it.

Light finds out that he now has the power to kill people quietly because the death note has instructions on how to use it. He plans to use this power to make his ideal world come true by killing off criminals. At some point, governments around the world notice that a lot of their criminals are dying in strange ways and figure out that someone is behind it, but they have no way of finding out who. Then they hire L, a master detective, to figure out who is killing people.

Even though the series as a whole is short, there are big plot changes in every book because the characters use every chance they can to move the story forward. Even though fans liked the second half of Death Note’s plot less as a whole, a few of the later volumes still rank very highly among about 15,000 Goodreads users.

Light and the rest of the Task Force try to get Sayu back from Mello (Volume 8: Target)

Target is the eighth book in the Death Note series. It takes place around the time when Light gets too sure of himself because he hasn’t been challenged in a while.

Mello finally steps up to give Light, who was L at the time, a real challenge: kidnapping his sister Sayu and holding her hostage in order to get the Death Note.

At this point, it’s clear that Light’s morals have been completely changed by the Death Note, which makes this volume a thrilling and uncertain ride. There are times when Light genuinely cares about his sister and father’s lives, and other times when he seems ready to give them up for his own goals.

There are exclusive interviews and comments in the ultimate series encyclopaedia (Volume 13: How To Read)

There are no new chapters in the thirteenth volume of the Death Note manga. Instead, it has in-depth character biographies, exclusive interviews, and more commentary from the creators. It’s still a real part of the Death Note story, so it’s in the top ten of the series.

Even though there are no new manga chapters in Volume 13, there are some parts that haven’t been translated for Western audiences yet. How to Read also reveals L’s real name, if you haven’t already learned it from the internet.

Soichiro puts on a deadly show to get his son out of prison (Volume 5: Whiteout)

Whiteout is the fifth book in the Death Note series. It is about Light and Misa’s time in jail after Misa is arrested for being thought to be the Second Kira and Light insists that he, too, should be locked up because he might be Kira. Soichiro is also locked up for his own safety. He can’t handle the fact that his son might be a mass murderer and can’t handle the weight of that.

Volume 5 is the end of the “Imprisonment” story arc and the beginning of the “Yotsuba” story arc. When Soichiro has to pretend to put Light’s life in danger to show that neither he nor Misa have Kira’s powers, it is the most exciting and tense part of the volume.

The reign of terror by Light is finally over (Volume 12: Finis)

In Death Note’s twelfth and final official volume, Light’s rule over the world as Kira comes to an end. Finis is about everything that happened from the time Mello took Takada hostage to one year after Light fell and died. When compared to other manga endings, Death Note’s ending ranks pretty low.

This is because Near and his task force are able to figure out who the Second Kira is and get his notebook. Many fans think the ending is rushed and doesn’t make sense, but it’s still satisfying to see Light finally get what he deserves for what he did.

The Yotsuba arc ends on a suspenseful cliffhanger (Volume 6: Give-And-Take)

Give-and-Take is the sixth book in the Death Note series. It starts in the middle of the Yotsuba arc and ends just before Light remembers that he was Kira. Light and L can’t figure out who Kira is on their own until Rem brings back Misa’s memories, which is the main event of the volume.

Misa puts herself in danger to get Higuchi to tell the truth. She does this because she loves Light very much and wants to help him no matter what. The task force then makes a plan to try to catch Higuchi and get the Death Note, but not everything goes as planned.

Misa leaves a trail when she looks for Kira (Volume 4: Love)

When Death Note volume 4 comes out, the story takes a big turn. L asks Light to join the task force by pretending to catch Kira with him while really trying to get information that will lead to L’s death. Misa, the second Kira, shows up and tries to get in touch with Kira through tapes that are played on Sakura TV.

When Light and Matsuda go to Aoyama, they don’t see any signs of the Second Kira, but Misa remembers him. Love ends with Misa being arrested because people think she is the second Kira, and Light giving up his Death Note so he can forget his past.

Light gets back his memories and finally wins against L. (Volume 7: Zero)

In Death Note Volume 7, the Yotsuba arc comes to a thrilling end, but L’s life also comes to a sad end. After Kira and L played a desperate game of cat-and-mouse for seven long volumes, Light finally wins when Rem writes L’s name in her Death Note and kills herself.

Zero introduces Near and Mello to the audience and shows how far their characters are willing to go to get the notebook and find out who Kira is. While Light is pretending to be L, Near talks to him, and Mello takes Light’s sister hostage with the plan of trading her for the Death Note.

L puts Light under watch, and Misa shows up for the first time (Volume 3: Hard Run)

In Death Note’s third book, Hard Run, the stakes are finally starting to get higher. L sets up cameras and wiretaps all over Light’s house, and his father is part of the team that is supposed to watch him and keep an eye out for anything suspicious.

Light gets the Death Note and finds out what it can really do (Volume 1: Boredom)

The first volume of Death Note is so scary and well-written that it will be hard to top. It’s not easy to make Light, whose father is the police chief and a role model, seem like the kind of person who would use the notebook with little or no regret.

Ohba does this very well. Volume 1 goes up to the time when something happened on the bus to Spaceland. Light spends most of this time finding out what the Death Note can really do and how much he can control his victims before they die. In this volume, Raye Penber also starts following Light because there are rumours that a student in his area could be Kira.

Early on, Naomi comes close to figuring out who Kira really is (Volume 2: Confluence)

Confluence is the second book in the Death Note series. After Light kills Raye and the other FBI agents in the first chapter, most of this book is about Naomi Misora. Naomi is right to think that Kira can kill in ways other than a heart attack based on what she knows about the bus theft and the death of her fiancé.

Naomi is a very dangerous opponent, especially because she used to be close to L. Light has a hard time stopping her in time. Soichiro lets L put wiretaps and surveillance cameras all over the Yagami house because he thinks Light is Kira. This is how Confluence ends.